E2E apps are saving the day during Ukraine Crisis

During this unfortunate crisis, where the world mourns for the people of Ukraine, an interesting technological development is taking place. There has been a huge surge in the use of the Signal messenger app. According to Matthew Prince, the co-founder and CEO of Cloudflare, the use of the Signal app is showing a spike after midnight of February 24. That is when Russia launched a military operation in Ukraine. 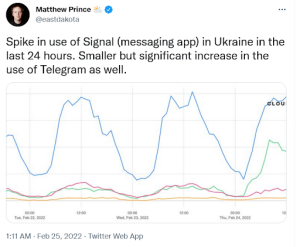 Cloudflare acts as a middleman between users and websites all over the globe. They are known to protect websites and services from cyber threats by providing a security blanket. According to the report, there is an increase in the usage of the Telegram messenger app as well. Telegram used to be a very popular app in Ukraine before these unfortunate events turned up.

The Signal app is considered one of the most secure messenger apps in the world. Mainly due to its end to end encryption facility. This means those who interrupt the data while it is being sent will get nothing but a piece of useless code. The original message will appear only at the other end by the recipient, and no one in the middle is trying to hack into the data.

Not only the people in and around Ukraine, but the Signal app is also a good choice for anyone who is concerned about the cyber war going on related to the incident. There are many pro and anti-Russian groups doing their best to turn the tide using certain levels of malicious cyber activities.

Signal says No to Telegram 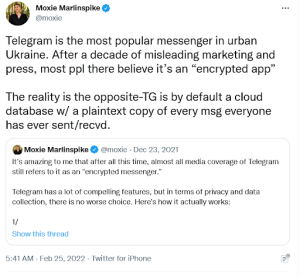 According to Moxie Marlinspike, the lack of E2E encryption makes Telegram less favourable when compared to competitors like WhatsApp. Telegram seems to send the encryption keys for messages sent between the users. Leading to hackers gaining access to the message.

While Telegram has been actively denying it being a Russian company for years, its founders  Pavel Durov and Nikolai Durov are Russian.

And that many employees have family in Russia. Moxie shares his fears about Russia using this to their advantage.

Snowden does not approve

The famed Edward Snowden however registered his disapproval on the Twitter thread that Moxie Marlinspike shared.

He called the accusations wrong and expressed displeasure over the comments he received for it.

Those who do not want to get involved in secure messenger apps war can make use of tools like the Tor browser. It is a widely used tool by privacy advocates to bypass internet tracking and censorship.

Facebook is now allowing users from Ukraine to lock their profiles so that information cannot be misused. Another social media giant Twitter too shared tips to secure the data and prevent hacking of accounts in Ukrainian, Russian and English.

Get in touch with our team to chat about how we can help you stay ahead of your competitors in the search engines. Contact us Today!

7 Ways to Use Video Marketing to Boost Your Brand