# Looking for a new CEO

Who is Elon Musk?

Elon Musk needs no introduction if you are into reading online blogs of tech nature. The man behind SpaceX, Tesla and Starlink have a diversified portfolio. And when he attempts to take over one of the world’s most influential social media platforms, it is more than news.

Twitter is a very funny social media platform. It is equally popular and as influential as Facebook but makes profit nowhere near the blue giant. In fact, Twitter is just surviving financially according to the latest reports. The 280 character chat platform attracts all sorts of crowds. Former US President Barack Obama leads in the number of followers with 131.5 crore users while Elon Musk is at 8 th with 80 crore followers. The Prime Minister of India is at 10 th with 77 crore followers.

While Elon Musk is a very popular figure on Twitter, it is not extended to its Board of Directors. Musk was the second largest shareholder with 9.1 % on his side. Elon Musk accused the board of taking a poison pill to resist the takeover bid. Interestingly, he made this accusation on Twitter itself where he has a very large audience and fanfare.

Musk promised the users that if he wins, the director board salary will be zero. In effect saving around $3 million every year.

Musk’s offer to the Twitter board was $47 billion which is almost the same as Sri Lanka’s debt which it is so badly trying to get out of. Funny memes are taking over the internet about the comparison with our favourite neighbouring country.

It is either very sad or funny that the world’s only Trillionaire is bidding for a company that is equal to the debt of a small nation.

Elon Musk is full of ideas. And he has many for Twitter too. One of them is a much sought-after Edit button. Other ideas include letting the ads go and turning the Twitter headquarters into a shelter for the homeless.

But the Twitter board was trying ways to bypass Musk’s bullish attempt to take control of Twitter. Twitter Board tried to sell shares at a discount to counter Musk’s ability to circumvent the board’s decision through shareholders. 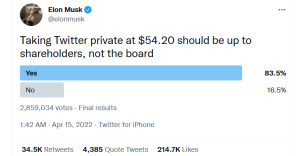 Elon Musk is not known for many failed attempts in his career. Many people believe that Musk could actually turn the tide for Twitter which is a favourite platform for a lot of people.

Twitter has been shy of innovative ideas including extending the character count and allowing more control over Tweets to users and businesses.

Agreed, Elon Musk is great when it comes to machines. But how much does he understand about social media? Can you actually bring the positive changes people expect him to?

Well, Musk was very smart from his initial expression of interest to closing the deal for $44 Billion. So there is a good chance that there will be more wonders in store for the users.

Musk has already revealed that Twitter might have a new CEO and there will be an option to monetise the Tweet. Making money from viral Tweets does sound nice. Hopefully, we might see Twitter at a new level one year from now.

What will Musk do next?

Probably a joke. But knowing Musk and how his brain works, there could be more big news, or not.

Get in touch with our team to chat about how we can help you stay ahead of your competitors in the search engines. Contact us Today!

7 Ways to Use Video Marketing to Boost Your Brand